Jack Crompton, Mayor of the Regional Municipality of Whistler, is probable feeling a bit lonely and foolish this morning. Thoroughly mocked and brushed away like a housefly after his ill-advised letter to Canadian Natural Resources Ltd.’s President Tim McKay, Crompton tried to do damage control with his sorta-sorry Facebook video.

Crompton was backpedalling a letter he sent in November to Canadian Natural, one of the country’s biggest companies, asking the oil and gas producer to please send some money to Whistler to help pay for the forest management and other costs the small-but-swish ski town has to incur due to climate change. That letter presumably was shared with other oil and gas company CEOs that were set to attend a CIBC investor conference in Whistler, causing CEOs to pull out in protest and CIBC to ultimately cancel that part of the program. Surely next year’s location of the conference, which has been held in Whistler for more than 20 years, is now in doubt.

On Twitter and LinkedIn, Crompton is taking a beating as a foolish hippie who doesn’t understand how his town’s bread is buttered, that is by people who fly from all over the world to ski at his town’s resorts. One transatlantic flight, as one of Crompton’s more polite critics pointed out, creates one tonne of CO2.

McKay responded to Crompton in a letter dated Friday (a month after Crompton sent his letter and the same day the story became news) with a three-page letter that was then shared by employees on LinkedIn, reframing the problem of climate change as global, and one about consumption rather than production, as Crompton approached it.

If McKay had been bolder, he would have made the statement publicly, rather than letting his response drip out. But as far as I can tell, McKay, the head of a $41 billion company, doesn’t even have his own LinkedIn account.

The conversation between Crompton and McKay is an important one for the country to have. It shows how very differently stakeholders of climate change, i.e. everyone, see the problem, which can only lead us closer to progress. How to address climate change is a conversation we need to have in public, between government, not-for-profits, First Nations groups, consumers, and, importantly, business leaders from all industries, not just oil and gas.

McKay took the the safe way out with his not-actually-private response, and right now, the public is vocally on his (or more accurately, the industry’s) side. But this could have played out very differently, and Canadian CEOs should be mindful of more of this to come.

Had Crompton’s letter not demonstrated a stunning lack of self-awareness on the part of the town, had Crompton published a better letter publicly rather than sending it to the president directly, had Canadian Natural recently had an environmental accident weakening its reputation, had McKay been under a cloud of suspicion for something, all of this could have gone very differently.

The campaign, being engineered by West Coast Environmental Law, is actually much wider than Whistler and Canadian Natural. The group’s website tracks who has sent letters to whom, with full text of responses. Eventually, groups like this will get more sophisticated and organized, and they will less easy to brush off.

CEOs who aren’t on the offence are playing defence, and in Canada, leaders are ill-prepared to fend off similar more savvy attacks. Frustrated municipal leaders are just one constituency who see opportunity in publicly calling on the CEO for action. We’re going to see much more of this strategy and some CEOs are going to lose their jobs due to poor response.

Hamdi Ulukaya bought an abandoned yogourt factory in 2005. Today, Chobani is a $1.5 billion company, maker of the best-selling Greek yogourt in the U.S. Ulukaya’s path, from the son of nomadic Turkish sheep farmers to yogourt king is interesting in its own right. But it’s the success of Chobani twinned with Ulukaya’s work supporting refugees that makes him a different kind of CEO. Thirty percent of Chobani’s 2000+ employees are refugees.

To get other companies to commit publicly to supporting refugees, Ulukaya started Tent Partnership for Refugees. This morning, Tent released a research report authored by researchers at NYU Stern to give other businesses a good shove to take their own action on refugees. The study found that on the whole, you’ll have a net gain of customers if you take some action to support refugees, whether it be donating money, providing support services, or hiring them, as Chobani committed to do.

The online study of 7,139 U.S. respondents noted that women, non-whites, and Millennials were all more likely than the average to support you if you support refugees, findings that are in line with many other studies.

Knowing though, that not all businesses depend on the average American as their customer, the study noted that supporting refugees abroad, rather than in the U.S. was less polarizing, giving those companies that want to help but are afraid of a backlash, a way forward. 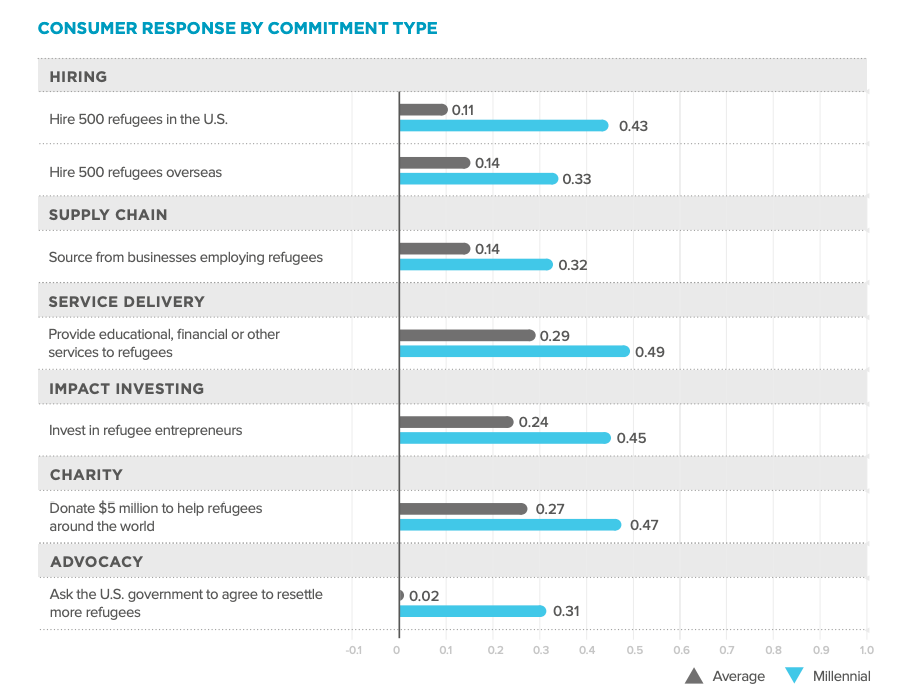 As with most research on consumer attitudes towards corporate and CEO activism, this study asks about buying intentions rather than actions, so there’s a significant caveat to the findings. Chobani itself probably has some of the best data on the impact on sales from the efforts of its CEO, but as it’s a private company, we’re unlikely to see it. And given how ingrained Ulukaya’s activism is embedded in the company brand now, it would be hard to extract the impact in a definitive way.

The data in Canada on attitudes to refugees and immigrants is all over the map. A Pew Research Center report in September said 74% of Canadians support taking refugees. By contrast, the live poll within a resulting Toronto Star story showed that 55% of the 1761 respondents did not. An Angus Reid poll in August said that they want the federal government’s 2018 target for immigration dropped, compared with 36% in 2014.

Suffice to say that if the data is so conflicting, it’s hard for a Canadian CEO to really know how customers are going to react if the company pledges support for refugees. (There’s an entire other question about how support for “refugees” and “immigrants” differs.) Perhaps that’s why the few CEOs (founders, really) willing to take public action to support refugees lead private companies.

Mohamad Fakih took the risk. The Lebanese-born immigrant started Paramount Fine Foods in Mississauga, Ont., and turned it into a 60+ Middle Eastern food restaurant chain. Like Ulukaya, Fakih has committed to hiring refugees, more than 150 in 2017.

“The private sector has a huge role to play in fostering better prospects for refugees in Canada – and it makes good business sense, too,” Fakih said in the news release. It’s fair to say that his activism has at least not gotten in the way of building his loyal customer base.

Without research that demonstrates more clearly the link between customer buying intentions to buying actions, however, public companies will be reluctant to take action, particularly given the incredibly risk averse profile of CEOs and boards in Canada. More to come on that another day.