The founder of TOMS Shoes, Blake Mycoskie, decided in November 2018 to try to do something about gun control in the U.S. On Monday, Mycoskie was publicly joined by three CEO peers, who co-signed a letter to members of Congress, calling for them to pass an act calling for background checks.

Levi Strauss & Co.’s Chip Bergh, RXR Realty’s Scott Rechler and Dick’s Sporting Goods’ Edward Stack have each spoken out about gun control before, but joining their voices together is an important moment in CEO activism. Each has determined that they can and should use their profile and influence to guide the country in ways they believe right.

Mycoskie reveals that about 12% of TOMS customers will cease to buy his shoes as a result of his gun activism, but that other customers will be more loyal and new customers will be attracted to the brand. Each CEO had to make their own decision about the net effect of activism on their sales and their employee retention, but Mycoskie and the other CEOs are now running test cases of how CEO activism impacts brand.

Sure, these companies will lose some anti-gun-control customers. But if nobody does anything to stop the epidemic of gun violence in this country, they’ll also lose customers who get shot.

At the same time, because these CEOs have joined together, they have provided air cover for other CEOs who want also speak out in support of this movement, but are concerned about the impact on their brand. Mycoskie, Bergh and Stack in particular, being more well-known, and first movers, are the ones that will be named CEOs in any media coverage, significantly reducing the risk to the next group of CEOs who join.

Whether the CEOs’ letter will have any impact on the House vote on Wednesday is questionable. But certainly they have shown their stakeholders who they are as CEOs.

Floyd Marinescu had been studying the idea of universal basic income for a couple of years when Doug Ford took over the premier’s office in 2018 and cancelled Ontario’s pilot project. The CEO of C4Media saw how a guaranteed basic income could help abused women, exploited workers, and the sick and encourage entrepreneurism. And he saw how his own successful business was disrupting the labour market, over time making it harder for Ontario workers to survive. So he publicly challenged Doug Ford, something most CEOs were loathe to do about anything. In doing so, Marinescu and the more than 120 CEOs who signed an open letter supporting universal basic income changed the policy narrative, helping to build grassroots support for a program that government would be hard-pressed to enact alone.

I have worked with hundreds of entrepreneurs and one thing they have in common is a mindset of abundance and opportunity. Universal Basic Income would give millions the sense of security they need to start a company. Business and creativity would boom. https://t.co/3c125QVP8Y

Marinescu and Pythian CEO Paul Vallée, who co-led the CEO group, are among a new generation of Canadian CEOs who believe they have a role in civil society, and as owners of their own companies are unhampered by many of the risks with which  CEOs of publicly traded companies grapple.

Through their advocacy, this CEO group is changing the narrative of universal basic income. By presenting a business case for it, they have made it harder for governments to dismiss the idea, and armed politicians who support the idea, arguing that what is good for the poor can also be good for business. And if that’s the case, exactly whom is Doug Ford protecting by cancelling the pilot project before the data is even in?

Universal basic income is just one of myriad issues that would be more richly discussed if CEOs spoke up publicly and challenged the common narrative. But it takes a commitment to the greater good and broader economic prosperity from CEOs mired in short-termism, and the courage to challenge government leaders prone to vindictiveness to get to better outcomes.

Because most of the CEOs who joined Marinescu and Vallée own small to mid-sized private companies, they are also free of shareholders, boards and other stakeholders that stop leaders of bigger public companies from stepping into the fray of a discussion that doesn’t directly affect the success of their business.

There are signs that more CEOs are getting on board with a growing trend of CEO activism, though. Witness the discussion RBC CEO Dave McKay and Enbridge CEO Al Monaco had at the Canadian Cub in Toronto this week about energy policy. They discussed the opportunity of national prosperity that would come with a proper national strategy on energy, and the consequences of not having one. Yet McKay and Monaco’s call to action is more easily dismissed than that of Marinescu and Vallée, because both of their companies’ fortunes are directly tied to building pipelines.

That is not to say that McKay and Monaco should not be speaking out – quite the contrary. But we also need CEOs from consumer goods companies, manufacturing and agriculture to speak out about energy policy. Energy and transportation infrastructure matter to all businesses and people. CEOs from other industries are thus less easily dismissed in the discussion because they are advocating for a more successful society for everyone.

Too many of our public debates pit interests of people against the interests of business. Yet so often, what’s good for business is also good for people. We need more CEOs to follow the lead of Marinescu and Vallée and explain why.

Read more about Marinescu’s op/ed on UBI  in the Financial Post here and the launch of the CEOs’ initiative last fall here, in the Toronto Star.

Trust = Power. But Canadian CEOs are Wasting The Opportunity

Edelman Canada President and CEO Lisa Kimmel presented the Canadian results of the annual Edelman Trust Barometer at the Toronto Board of Trade this morning. Having worked with the data closely when I worked with Lisa, launch day is a bit like Christmas for me, and has strongly influenced my thinking.

This year’s data reinforced for me both the business imperative and the opportunity that Canadian CEOs have to change the way our country talks about public and social policy, along with news of the day.

Consider a few stats and findings side by side. 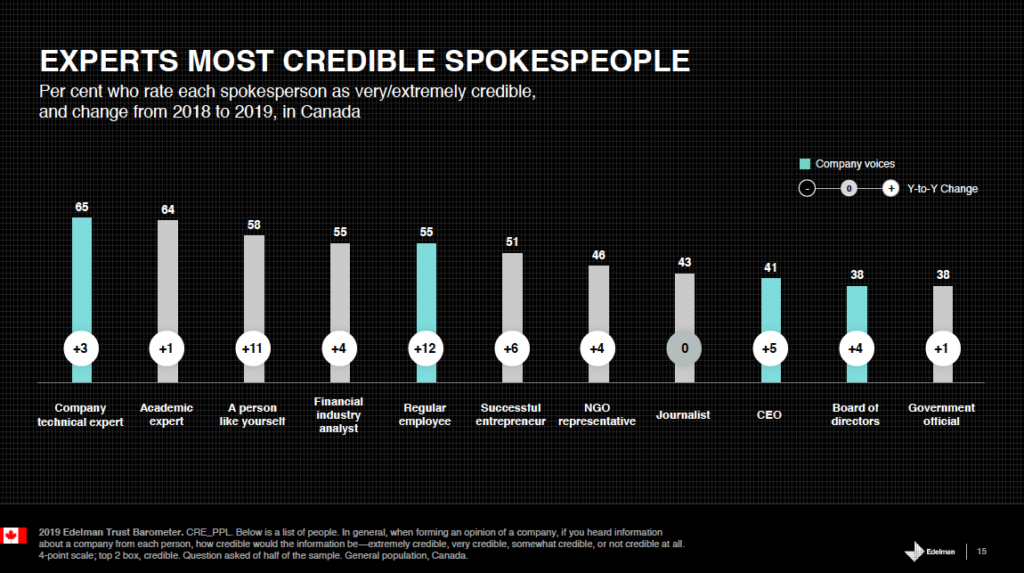 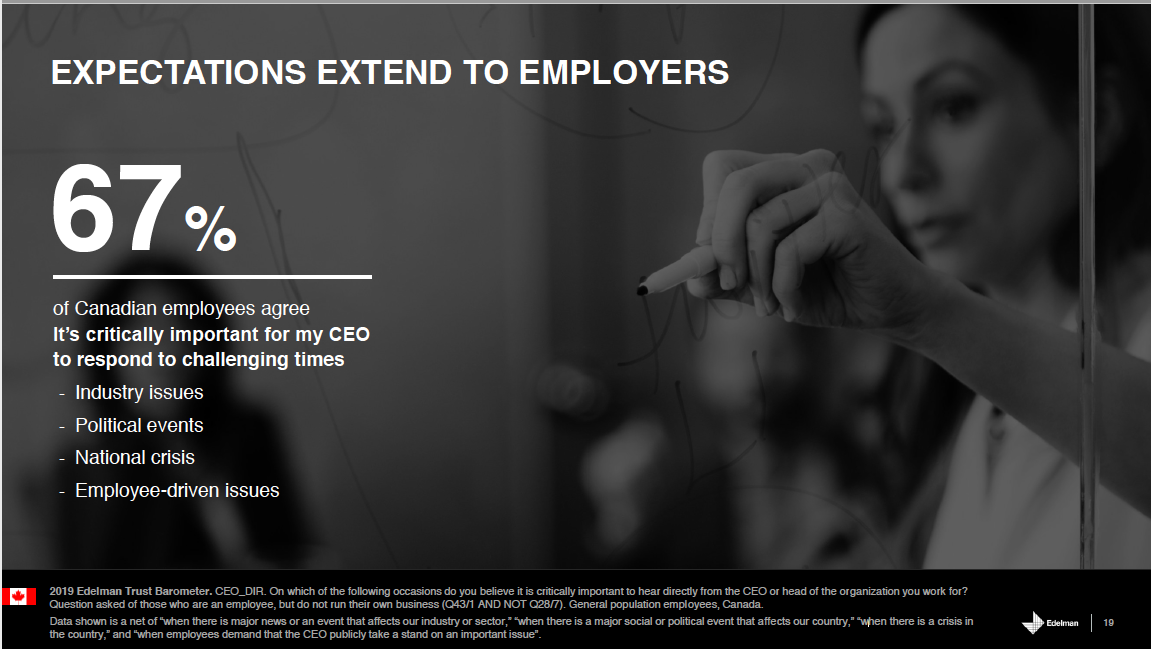 4.  67% of respondents agreed that “It’s critically important for my CEO to respond to challenging times”, such  as industry issues, political events, national crisis and employee-driven issues.

So you have a huge proportion of the country that feel the system is failing them, suggesting something has to give. We have to change how issues are debated and how policy is made. They trust business  as least as much as government, and expect business leaders to be part of the solution. CEOs are more trusted than government officials, who are dead last in the trusted spokespeople category when forming an opinion about a company. And employees both expect the CEO to engage in the conversation, and are more trusted than the CEO in building company reputation.

And yet. CEOs, for a whole host of very valid reasons (including a difficulty in measuring risk), some poor excuses (e.g. it’s not my job), and a systemic lack of courage, have been completely absent in some very important political events over the last few months.

The Trudeau government sets out a plan for a carbon tax designed to curb pollution, and over time change business behaviour, in an effort to protect the environment. Collective business response? Crickets. Really? No one outside directly affected business had anything important to say?

(I will give a pass for the moment that CEOs aren’t speaking up about the SNC Lavalin/Justice Minister affair. That one is a hot mess.)

CEOs are simply absent from the most important public debates of the day, all of which are important to business. They are afraid. They believe it’s not their job. And they have enough on their plates without being told their employees expect them to wade into the headlines.

But. There is so much white space for the first few CEOs who are willing to speak up, take risks, and say out loud what they are saying behind closed doors. And that can provide them a competitive advantage that is good for business, including that their employees might stick around.

*See the Edelman Trust Barometer for definitions and survey methodology. It matters.