It’s “a lonely position to take.” That’s what  Levi’s CEO Chip Bergh told TOMS founder and former CEO Blake Mycoskie about his plan to take a stand on gun violence. Get some personal security, Bergh said, according to an excellent piece in Fast Company.

On The Tonight Show Starring Jimmy Fallon on Monday night, Mycoskie, announced that he was making a $5 million contribution to organizations fighting gun violence, and had set up on TOMS website a way for Americans to send an actual postcard (nice touch) to their representatives, calling for universal background checks, in 30 seconds. In doing so, Mycoskie has jumped into one of the most polarizing debates in America today, using his company’s weight as a tool.

Mycoskie already knows from experience of what one person can do by intertwining business and social activism. (The 86 million pairs of shoes he’s given away thanks to his business model are a pretty convincing proof point.) His tipping point on gun violence was a phone call from his wife after the recent shooting in Thousand Oaks, Calif., near where they lived. She was afraid to take their child out.

This campaign is filled with risk, though less so than you might think. Yes, some stores may drop his brand, while others will become more loyal. But data suggest his target customers will embrace the effort – 71% of millennials expect CEOs to use their positions and influence to advocate for causes they believe in according to a recent Stanford study.

Here’s what the U.S. site’s landing page looks like today, on U.S. Thanksgiving: 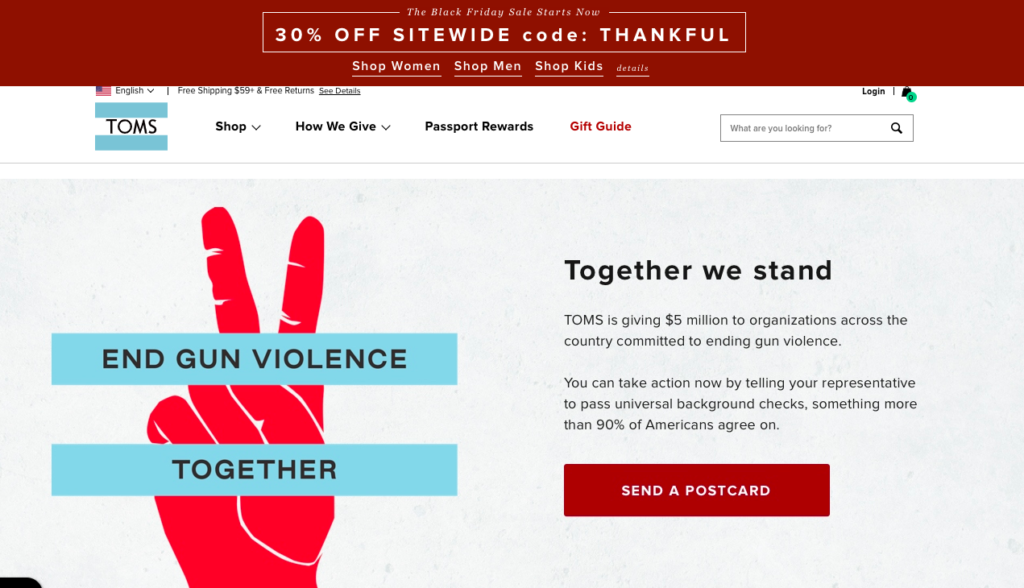 versus what landing page on the dot ca site.

He’ll have data in a few days on the impact on one of the biggest shopping weekends of the year. Did the people who made an impulse purchase or made a purchase to support him after sending their postcard outweigh those who went to the site to buy shoes and bounced because they were turned off by the campaign? Did the news and social media coverage help find new lifelong customers?

One of the important parts of this story, from a CEO activism perspective, is that Bain Capital, which owns 50% of TOMS, said yes when he told partners what he wanted to do. In doing so, Bain is tacitly accepting reputational risk. It’s unlikely that Mycoskie could have done this if TOMS was a widely held public company. Most of the CEO activism that we’re seeing in the U.S. today is coming from CEO founders who control their companies and are immensely successful.

It might seem that the $5 million donations and a postcard campaign are relatively small things when measured against the size of the gun violence problem facing the U.S. Mycoskie chose after all, to address an aspect with almost universal agreement among Americans – universal background checks. Yet he is indeed in a lonely place right now, as Levi’s’ Bergh said. In doing so, he carries the burden of media attention, backlash and reputation risk. In doing so, he has provided air cover for other CEOs who want to step up. The third, fourth or fifteenth CEO to join in his action, faces much much lower risk, as was illustrated in 2016 when Salesforce’s Marc Benioff took a stand against 2016 legislation that was anti-LGBT rights in Georgia. Hundreds of CEOs eventually joined that movement that helped push back on that bill, but mostly their participation will be a footnote.

P.S. Here’s a great profile of Blake Mycoskie from CNBC.